The Doberman Comes in 4 Colors 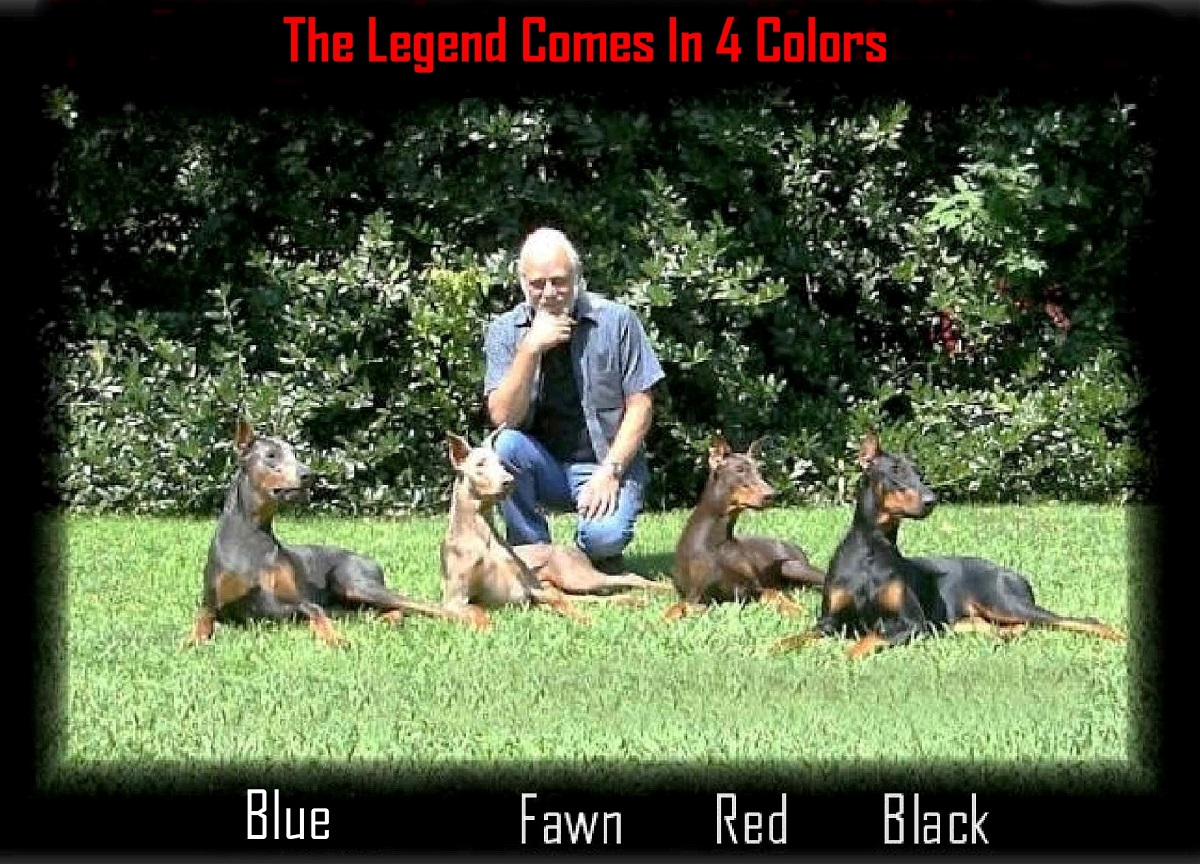 The four colors together  for study

For those just learning about Profiling, more how a breeder can determine before mating the future potential of a match.  Understand that with enough ancestral knowledge, one can even match two Black & Rusts to produce a four-color litter (called a rainbow litter).

We know since we began building this site  folks throughout the America's - well through out the world who have spent  untold hours enjoying the world of the Doberman Pinscher through pictures offered  by both owners and sellers consistently comment on the consistent structure,  color tones & ear crop quality of the Hoytt Dobe. Then there are the folks who  ask a few questions about how we capture so many  formal poses which we  will as with most questions asked try to pass on some of our knowledge. But one  of the areas we still have not found an easy answer to is the control of natural  lighting.

Keep the following in mind when you want  to replicate color tones. In effect while the physical class of our Dobes are  their birthright, the time of day, the lack of cloud cover, cloud cover as well  as the changing position of the sun from month to month should be considered when going for that perfect formal photo. Today our 'phones' can also capture the perfect shot that can challenge even the big boys toys. Something as  basic as keeping the sun behind you will make the difference. But camera at hand when without a plan the 'kid' catches your eye doing perhaps that silly thing  you will always remember him or her for but would be hard pressed to explain to  those outside your world you can pull up the photos. And you may have captured  that personal million to one shot. As I did with the original photo of my son  and Hoytts Bewitched back in the seventies we turned into a lithograph called  Pals or the silly photo of my Lex upside down in bed taken last year found on  our Planned Parenthood page.

On the following note to our clients.

Do also send us those photos that show the private side of life with your Hoytt Dobe it will bring smiles to other Hoytt  Dobe owners as well as those folks who must live without a great Dobe. 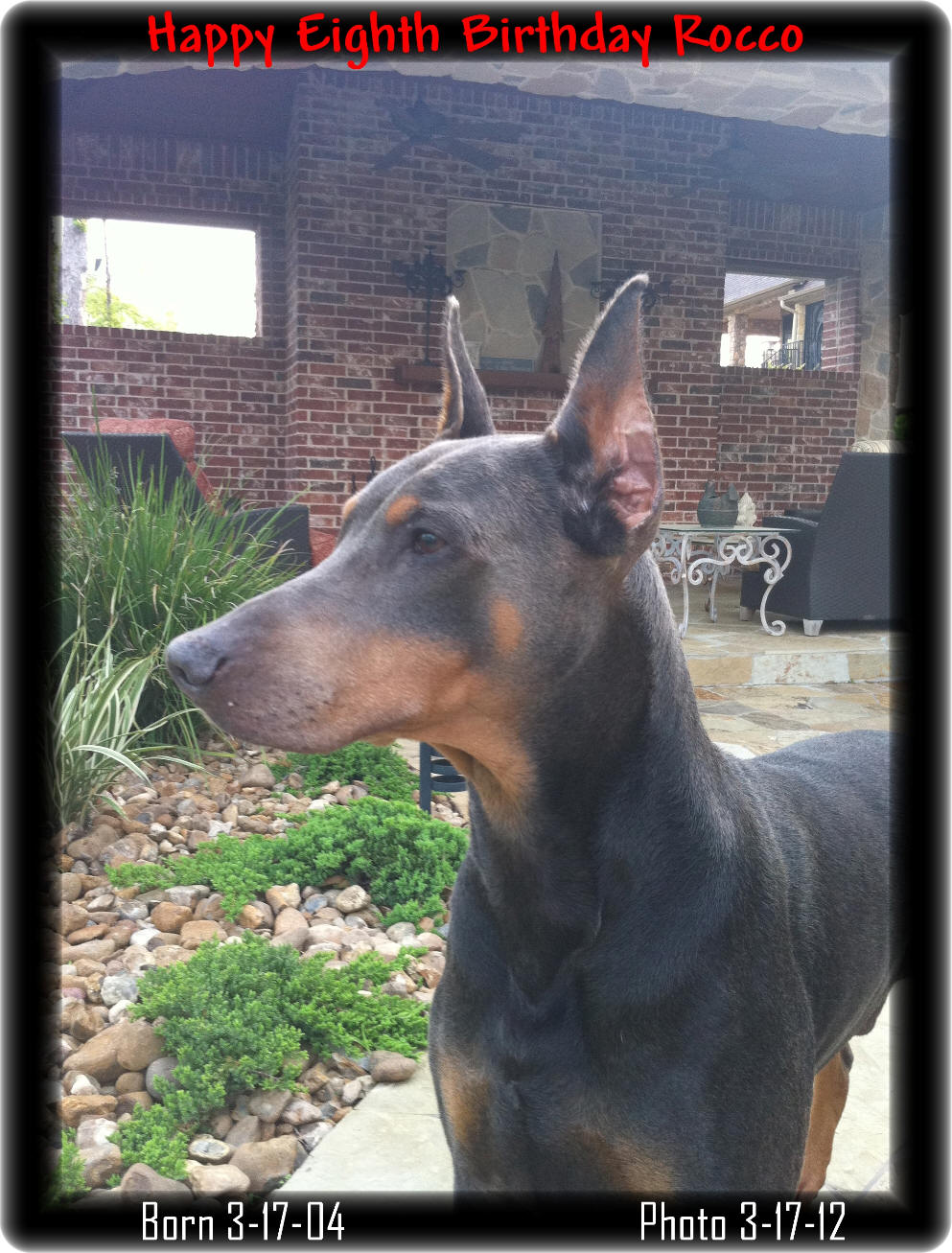 Know that there are different shades of black - from a dirty dark gray to a deep ebony while registration  papers say black. Even the rust marking while called rust can be a washed out  straw to so dark you almost can't tell there are markings. 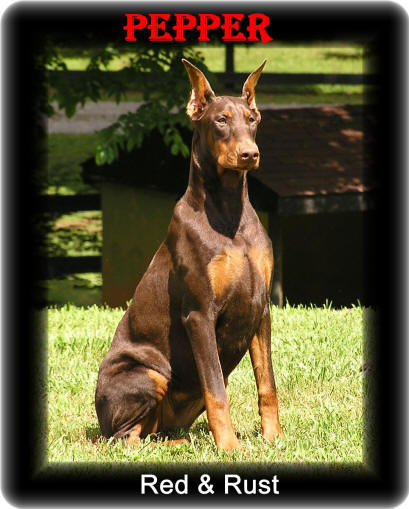 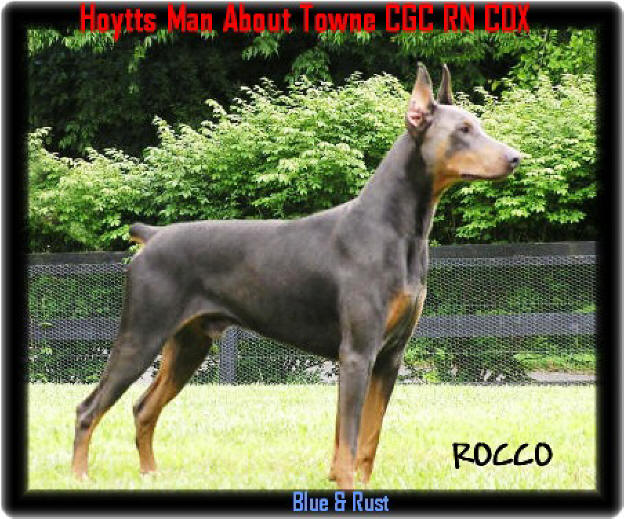 We think  the Hoytt Dobe in blue should be called Silver and Rust. 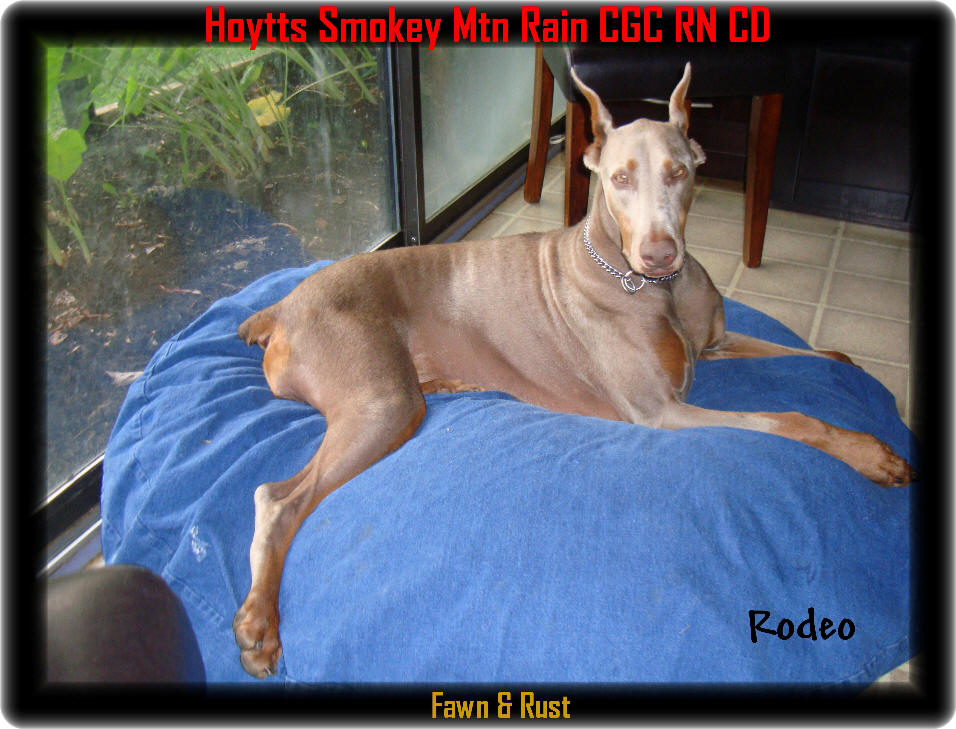 Our fawns have a gold hue complemented by rich rust markings

Are you kidding??? You really did not expect to find white Dobermans here...we also don't breed SNAIBLERS

The Rarest of the Rare

It is a fact, without turning to the Hoytt's, locating a great black & rust or red & rust Dobe with personality, appearance and intelligence, is primarily an exercise in luck. When one considers a fawn & rust or blue & rust, the constellations also may have to be in the right position unless again you turn to the House of Hoytt. Pictured here is  Hoytts First Lady Cashmere heading to Michigan and photographed with her owners looking on. Definitely a surprise for the other Hoytt Dobes already part of the Davidson clan and we do mean clan since other separate family relations also have Hoytt Dobes.

Yet ask veterinarians or Dobe sellers; most have never seen either a fawn or a blue, less have seen one with outstanding color tones and a excellent coat except from Hoytt. Cashmere was just 14 weeks and the first untrained Hoytt Dobe in the family but within a day she would be joining Commander and Ember who in a wild moment, planned of course, have given of themselves nine outstanding examples of the breeders art.
However, at the House of Hoytt, great Dobes come in all four colors and Fawns are just one more area we excel in. The fawns pictured here and throughout the site are simply the best examples of the breeders art the world has to offer and if you head to the Buyers Gallery you could meet a few of these guys in need of  family. Now our Cashmere was born 4-10-10 and the result of five generations of genetic structuring creating Hoytts Kiss of Fire and Hoytts Texas Twister and I am pleased to direct you to these two again having three fawns from these two born 7-4-11 ... we were lucky to be allowed to contact these two Hoytt Dobes once more before they were 'fixed' follow through and you should meet the three or the six chosen for educational programs that also need homes. 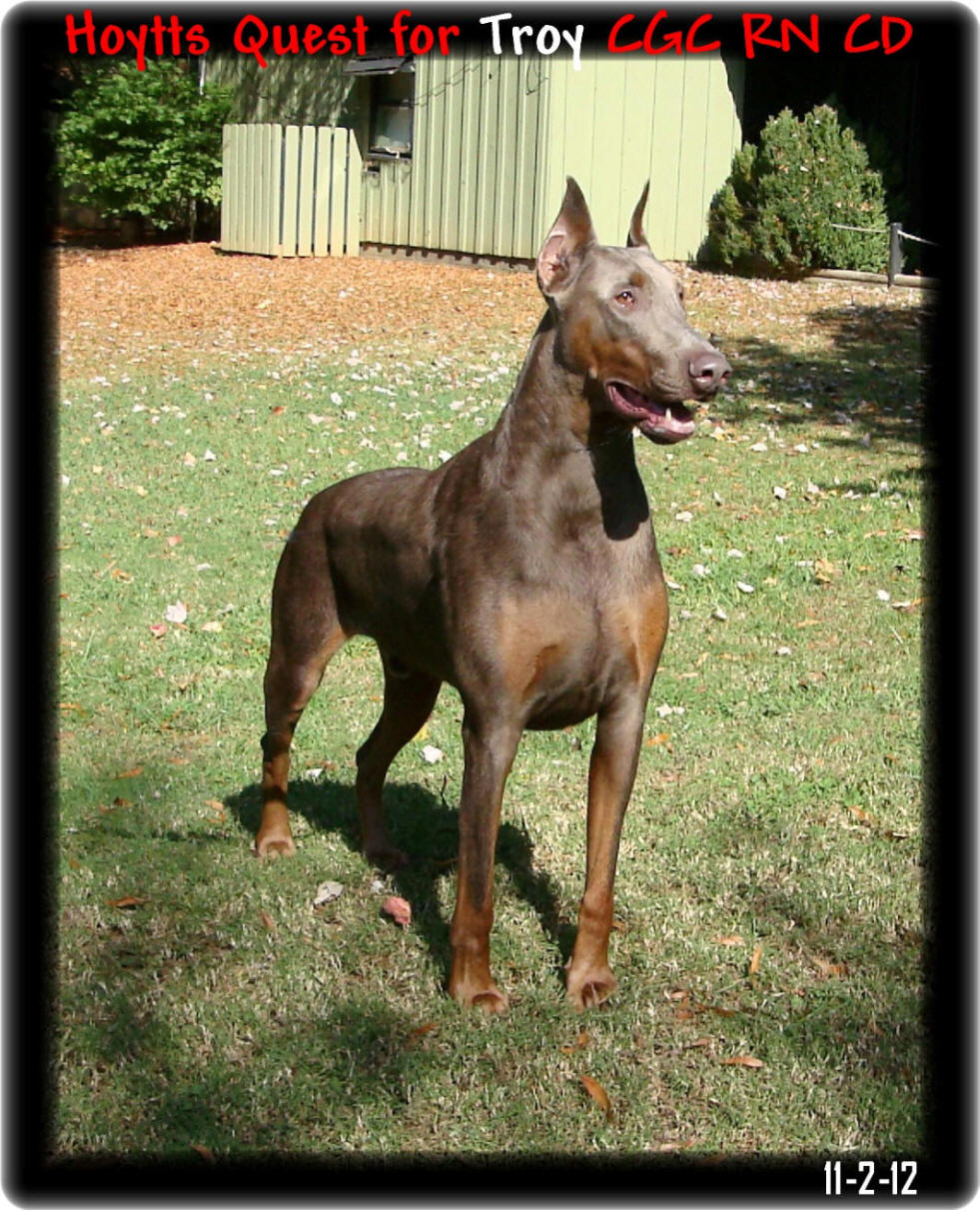 Hoytts Son of Troy 10 who CGC RN CD born 11-29-along with his red 'other half'   graduated following completion of the Super Pup Three program. 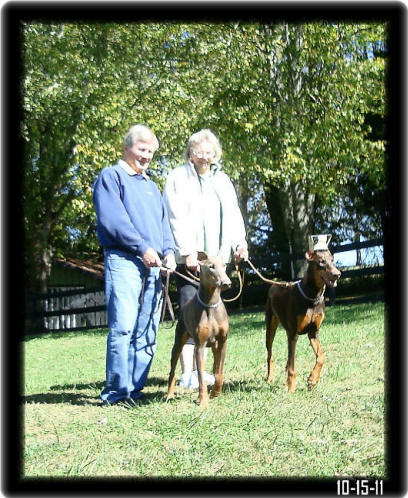 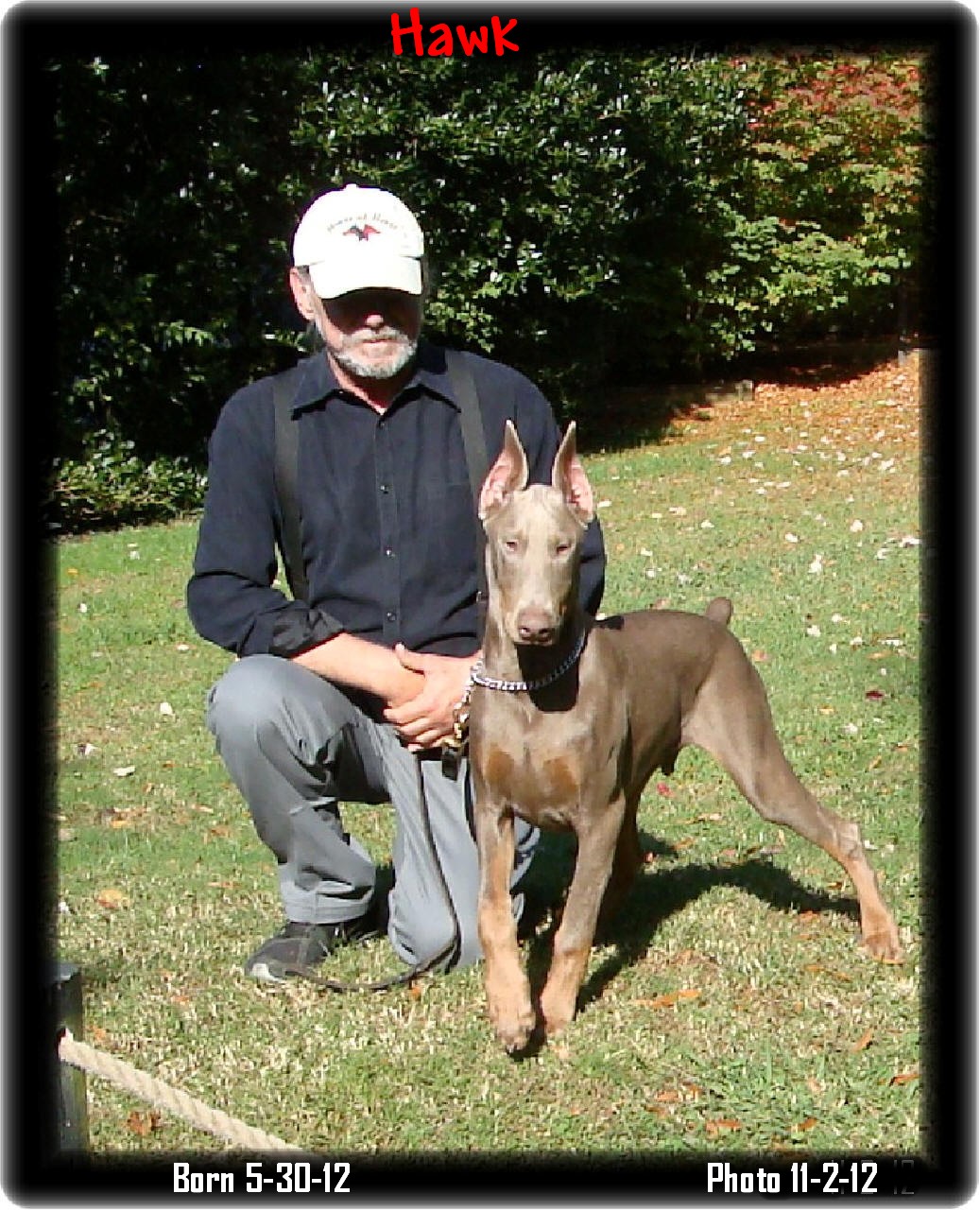 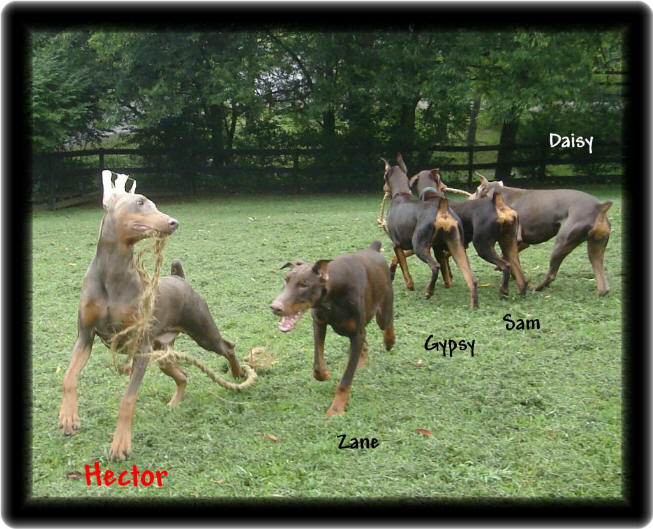 Layla  formally Hoytt Beach Baby CGC out of Sonny, formally Hoytts House of the Rising Sun CGC RN CD CDX WAC and Terra, formally Hoytts Connection of the  Heart CGC RN CD born 3-7-11. Hector and Layla interestingly now enjoy double residences, one up north on the shores of the Great Lakes during the summer ( on the beach ) and the other also on the beach but a winter retreat in the Sunshine state thus the uniqueness of their formal names.
And if these young fawns have not caught your eye check out the adult version.

Longevity...this area is rarely given much thought by the first-time buyer, but a serious consideration to those who have already enjoyed the unique relationship only a great Dobe can offer. While dog sellers have little first-hand experience related to the actual life history of the first (both parents) or even second generation ( adding the grandparents - total six dogs ), the House of Hoytt, in creating a secure Blood Line, first had to use all three areas of the breeders art until we could maintain Line breeding. Once we achieved this level of the breeders art, we were able to create this well monitored line known as HOYTT. But first we needed first-hand experience so we followed the life and times of each new generation until we had the combination qualities we sought.

Today we use our past experiences working with the Dobe and its owners many placements dating back to the sixties to guide our tomorrows.  We have built a Line that carries our name though the hundreds of individually placed background Dobes, and these past experiences help profile an individual Dobe and then match it with an individual or family. This is why we do what no other seller of Dobes can actually offer, choose a Dobe for its future adult attributes, for we have tracked everything from longevity to issues concerning health longer than any other specialty breeder in history. These are just two of more than a dozen key areas that this site offers to educate the future owner of a Dobe and in turn give those interested the greatest opportunity to bring into their lives more than just a registered example of the Dobe the chance to make their decisions based on knowledge.

Color by the numbers...For starters the prominent color offered at House of Hoytt isvariables-under construction ), with the next in line, our Red & Rust. Of course we also offer both the much more limited colors of Fawn and Rust along with our Sliver & Rust, the latter generally called Blue & Rust. Now, in the area of Longevity which for medium breeds average eight/nine years, six/seven for the bigger boys like Great Dane, Mastiffs, etc., we have found that of the four colors our Dobes average 9/13 years, with our Black & Rust averaging individually 10/11 years. But like one of our special mention Dobes, Maximillian Von Hoytt RN LN CGC, who is introduced in Owners Gallery, who in early 2009 entered classes with the Association of Pet Dog Trainers ( A.P.D.T). Within two months of his 'first day of class' he stepped into the ring and in the following twelve weeks he certified in AKC RN competition, received his CGC certification and also under A.P.D.T sanction won his RL title. I attended his second showing in AKC trials and videoed the boy and his 'other half' at a show outside Philly. I did not know who to be most proud of, Max's mom, Max, or myself. Actually my job was simply to select the right Hoytt Dobe for the soon to be clients. I guess I can just say life is good when everything fits. And in answer to the question. I guess I'd have to say it was owner and canine as a very special team I'm most proud of.  Now, while Max does not represent his color group age average, Max is fourteen, I have found that most of our reds enjoy a bit longer life, averaging 11/12. This average comes at a time when even an extra good day is much appreciated.