‘Sorry to be tardy in getting back to you; I’ve been a prisoner of my doctors for the past few days. 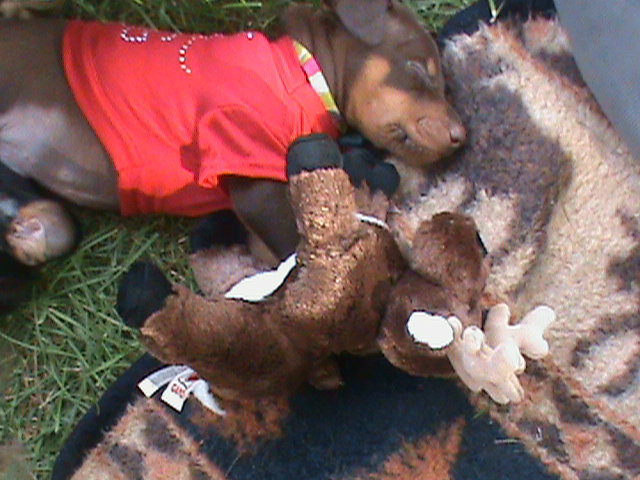 First, let me say how thoroughly pleased and happy I am that I found the House of Hoytt and engaged the process which resulted in my acquiring Ezra, the best dog in the world.  Ezra, at seven months, is so well trained and even tempered; yet he is eager to learn and learns quickly. He’s great.
So far, he has met my son, my pastor and his wife and a small group of neighbors and friends.  Everyone says, “Love at first sight!’  Just the other day, one of the teenagers in the neighborhood asked if she could walk Ezra around the cul-de-sac in front of my house.  I agreed, and, as she and Ezra walked the circle, she said, “Mr. Lou, I feel like I’m in the show ring at Westminster!”  I replied, ‘I feel that way, too, every time we go for a walk.’
When we encounter one of the neighborhood children on our walks, Ezra sits by my side and waits to say, “Hello.”  He has never lunged or barked at a child and, of course, the children think he’s beautiful.  So do I.
Ezra loves his pet door to the back yard and began using it on day one.  Thanks for showing him how to use the pet door at Hoytt Academy.  Ezra also likes his Hoytt bed.  Then, so does my son.
As you suggested, when a new person comes to the house, I prepare a small plate of cheese, and, after introductions are  made, ask the new person to give Ezra a piece of cheese.  This ritual puts both Ezra and the new person at ease and has broadened Ezra's circle of friends.
The other day, Ezra and I walked over to our local Vet’s office to drop off Ezra's medical file.  When we arrived, one of the vet tech’s told Dr. Mayer we were there and he came out to meet Ezra.  His comments were, “Good looking dog"; “Really nice ear trim"; “Great disposition"; and, "Lou, you got a great Dobe.”  Of course, I agreed with him.
and I have only just begun our journey together and I’m sure that, as time goes by, I will have more stories to tell.  Let me know when you’ve had enough.  In the meantime, please be assured that you and the rest of the House of Hoytt team have made me very happy and are in my thoughts and prayers.
Lou Davis

PostScript - Two more notes of interest. Ezra was flown to his new dad on January 31,2017 and like Gracie Ann's mom Mr. Davis is also legally blind.
Thank You For Visiting House of Hoytt